Tamino’s most recent post “Oklahoma: Not OK” covers the change in number of earthquakes per year in Oklahoma in the wake of fracking. It got me interested in the distribution of magnitudes. Here are the results as an animation:

If you want to play around with the data for yourself, here’s the R-script:

There are three events in the 2010 to 2011 period listed with a magnitude of 0, these were ignored in the creation of the histograms.

In 2009/2010 a change in instrumentation and/or analysis of the data seems to have taken place. On the one hand a new magnitude type “Ml” is introduced and right away accounts for the majority of analysis, on the other hand several of the other types gain improved depth resolution. It is unclear to me, wether or not this change influences the earthquake count numbers. 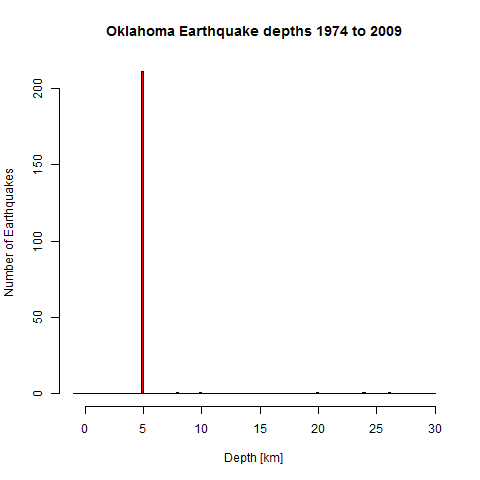 I am trying to publish the following comment on WUWT on the “About that graph” thread and keep getting the response “Sorry, this comment could not be posted.”

An old blog post at HOT TOPIC deals with all the “Oh look at Greenland” nonsense. It extends the temperature record at the GISP2 site to the present day using data from Box et. al., 2009.
The uptick at the end of all the GISP2 plots that dbstealy linked to covers the 1790-1850 period, not the “Mann Hockey Stick” as one of them claims. All of them get the “current” temperature wrong. Current temperatures at the GISP2 site are about 1.5°C higher today (2000-2009 average) than they were in 1850, the time at the end of the uptick shown by dbstealy. 1.5°C above 1850 is the highest temperature for the last 2000 years and surpassesed only for a few, short periods over the last 10000 years. (image from HOT TOPIC).

A true skeptic would know all of the above.

A true skeptic would show all of the above.

Worst of all, the above post by Gareth on HOT TOPIC could hardly have escaped dbstealey’s attention, as he was moderating replies on the WUWT post by Easterbrook, where references to Gareth’s takedown were all over the place.

As I have reported before, Lord Monckton keeps applying for patents relating to “Therapeutic Treatments”. Below is the current list of the published applications, including links to the information available at the UK Intellectual Property Office website, the date the application was lodged, published and of the Not-in-Force date (NIF). All of them list “Christopher Monckton” as applicant and all have have the title “Therapeutic treatments”, except for GB0915801.5 which lists “Theraputic treatment” [sic]. All of these applications are reported as “Terminated before grant”.

The application for a patent is a multi-step process. Here are the first few steps paraphrased, more details can be found in the linked guide.

Take note, that except for step 3 any processing done by the IPO will only go forward, if the appropriate fees have been paid. The “Date Published” in the table above does not refer to step 6, but step 3.

There is that 1974 CIA working paper [1] climate “skeptics” like to brandish when it comes to the “coming ice age” media coverage in the 70s, in order to show that it wasn’t just a media event but scientific consensus back then. One of the favourite passages is this section on page 7:

Early in the 70s a series of adverse climatic anomalies occured:

The usual suspects either accept it as gospel or even use this passage as refutation of todays data: Steven Goddard, David Archibald at WUWT, Marc Morano at ClimateDepot and Canada Free Press.

When looking at the bibliography of the CIA working paper we find a 1974 paper in Science by Kukla and Kukla [2] that seems to support that claim, as the abstract reads in part:

During the past 7 years the largest changes occurred in the fall and in the continental interiors of Asia and America (8).

Two synoptic parameters which could readily provide information on the development of snow and ice cover in the northern hemisphere are (i) the total area momentarily covered and (ii) the running annual mean of snow and ice coverage for the preceding 1-year period. By 20 September 1973 the annual mean coverage was 37.3 x 106 km2, 11 to 12 percent higher than at the same time during 1968 through 1970. Snow cover-fall, the season when 15 x 106 to 55 x 106 km2 of the northern hemisphere is covered with snow and ice, started on 20 September 1973, compared to 17 September 1972 and 5 or 10 October during 1967 through 1970.

So far, so good? Well, for the CIA working paper, yes. At least they took a paper that was at that time state-of-the-art. Whether or not the CIA working paper gave a fair assessment of the overall state has been discussed elsewhere. For the “skeptics”? Not so much. After all, satellite imaging and its analysis was still in its infancy and there may have been revisions. So let’s simply turn to Google Scholar and look up the title of the Kukla and Kukla paper (one of the easier ways to find the link to the Science paper). Letting your eyes stray over the page you spot:

A link to the PDF of the article is provided courtesy of rutgers.edu [3]. Nice! And one of the original author co-authors the paper. Good. Concerning the 1974 paper we find:

The quality of the NOAA snow charts has improved with time because of improved sensors, increased interpreter expertise in recognizing snow-covered land from clouds and snow-free land, less frequent changes of the personnel involved in the charting and improved mapping techniques. The early maps have been found to be considerably less reliable, most often underestimating the extent of snow cover. This lack of consistency has been particularly pronounced in autumn as shown in Figure 7 and Table 2. Kukla & Gavin (1984) concluded that the errors in the NOAA charts were largest during the first five years of observation and that, consequently, Kukla & Kukla’s (1974) conclusion on the sharp increase of average annual Northern Hemisphere snow cover between 1970-1972 should be revised. The early (1966-1974) mapping of the Tibetan Plateau region was also determined to have been mapped with varying accuracy (Ropelewski, 1984; Matson et al., 1986).

Trying to get a copy of Kukla & Gavin (1984) [4] proved to be a bit more difficult, but the Library of Congress came to the rescue. A search for the proceedings of workshop containing that paper lead to the Hathi Trust Digital library. [3] got the page numbers wrong but that’s just a minor hick-up. Kukla & Gavin conclude (emphasis added):

We conclude that the snow cover charts for fall, particularly October, are deficient throughout the 1966-1983 period of record, but that the errors were much larger during the first 5 years of observation. The conclusion of Kukla and Kukla (6) on the sharp increase of average annual snow cover in the Northern Hemisphere between 1970 and 1972 was based on unverified charts and needs revisions. Almost half of the reported increase of snow during 1971 took place in Autumn (fig. 8). Because our evaluation shows that the snow charted for 1966 through at least 1969 was seriously under-represented, much of the reported change is actually an artifact of an inaccurate data base.

So what went wrong? The short version: low illumination in the snowline zone, dense forests, lack of frozen lakes as foolproof indicators and frequent dense clouds made the assessment of whether or not a patch is covered by snow difficult and resulted in a learning curve. Experience later on showed that earlier estimates had for the most part been too low. The paper includes a figure 7 (displayed below), where the original values (thin line, full dots) are compared to the revised values (heavy line, full circles) of snow extent in Eurasia at the end of October. For more details see the original paper.

To summarize: While the CIA working paper reported the increase in snow and ice cover in good faith, it has by now turned out that the “at least 10 to 15 percent” increase was an artifact. To claim that the increase was real from today’s perspective shows the claimer has not done his/her homework properly.

This seems to count as humor over at WUWT: displaying an older plot by Pat Micheals showing “Ten year running mean sea level rise from satellite altimetry”. The plot shown at WUWT is the one depicted in red in the below blinker plot. There are two observations to make: 1) the highlighted “trend” is only there if you leave out the most recent data, 2) part of the data is wrong. I calculated ordinary least squares linear fits to the sea level data for ten year periods ending in December of the year designated on the x-Axis. This is a bit fiddly, as the number of data points per year vary. While there is very good agreement between the true values and the plot by Pat Micheals his values are too low for the most recent years. If you want to get an OLS slope of 2.25 mm/year for data ending in December 2011 (as seen in the last data point of the Micheals plot) you may only use 8.5 years of data. I have no idea, how an error like this can occur in the Micheals plot. Looks rather sloppy to me.

A Question to Roger Pielke Jr.

I tried to post the following as a comment at http://rogerpielkejr.blogspot.de/2012/10/top-10-damaging-hurricanes-within-50.html but it did not show up (spam filter?). I repost the comment here for reference.

END_OF_DOCUMENT_TOKEN_TO_BE_REPLACED

A discussion at Stoat had me compare the IPCC FAR 1990 Fig. 7.1(c) to the ostensible “digitization” of said plot included in the Wegman Report as Fig. 4.5. I have rescaled the Wegman plot to match the x- and y-scale of the IPCC plot axes. Here’s the result.